Download this stater project, unzip and import it into Godot.

Run the game. Use cursor keys to control. Press up to get car on screen.

What nodes do we already have? Let’s look at them:

There is a little bit of code in player.gd but notice how the physics engine already gives us most of the behaviour required for the game.

Add a child node of type Camera2D to player.

In the Inspector, enable Current.

Set the Process mode to Physics.

Try changing the Zoom x and y. What happens?

If you would like the camera to zoom in and out, replace the camera() function in player.gd with this code:

The player node already has a Sprite setup so we don’t need to add one, but we are going to modify it.

Click on the Sprite node under player. In the Inspector you can see the Texture image. Choose a new image from Cars or Motorcycles in the FileSystem and drag it over the Texture in the inspector. (Alternatively you could drag it into the scene to create a new Sprite node.)

The car already has a CollisionShape2D but you might need to modify it if you changed the sprite.

Add an AudioStreamPlayer node as a child node of player. Rename it engine.

In the Inspector find the empty Stream. In the FileSystem find sounds/engine-loop-1-nomralized.wav. Drag this file on to the Stream.

Enable Autoplay in the inspector.

Replace the function sound() in player.gd with this code:

Click on the track node. Edit the tilemap to create your race track. You can come back to this and add more later.

I have only made collision shapes for the red/white barriers. The other barriers won’t work (unless you edit racing_tileset.tres and create your own shapes.)

Click on objects node. In the FileSystem find the cone.tscn file. Drag this file into the scene to place a cone.

What happens if you change Mass of the cone in the Inspector?

In the FileSystem folder Objects you can find some decorative images. Click the objects node and then drag them into the scene to create sprites.

Add an AudioStreamPlayer node as a child node of player. Rename it crash.

In the Inspector find the empty Stream. In the FileSystem find sounds/qubodup-crash.ogg. Drag this file on to the Stream.

Increase the Volume a bit. Decrease the Pitch. (Click Playing to hear it.)

Click on the player node. Click on Node on the top right to view the signals. Double click signal body_entered(body:Node) and press Connect to connect it to the player script.

Replace the function with this one:

Create a CanvasLayer as a child node of racetrack and rename it HUD.

Add child nodes to it:

For both labels, in the Inspector find the Custom Font and drag in the big font from the FileSystem (interface/fonts/kenvector_futre_32.tres)

Right click on the root node racetrack and select ‘Attach Script’. Press Create. Delete any code in the script, and add this code:

The timer should now work, but it doesn’t know when you finish a lap.

Add an Area2D child node to racetrack. Name it checkpoint.

Replace the generated function with this one:

In the Inspector, set its Shape to New RectangleShape2D. Drag the dots to make the rectangle bigger. Position the node over the finish line. 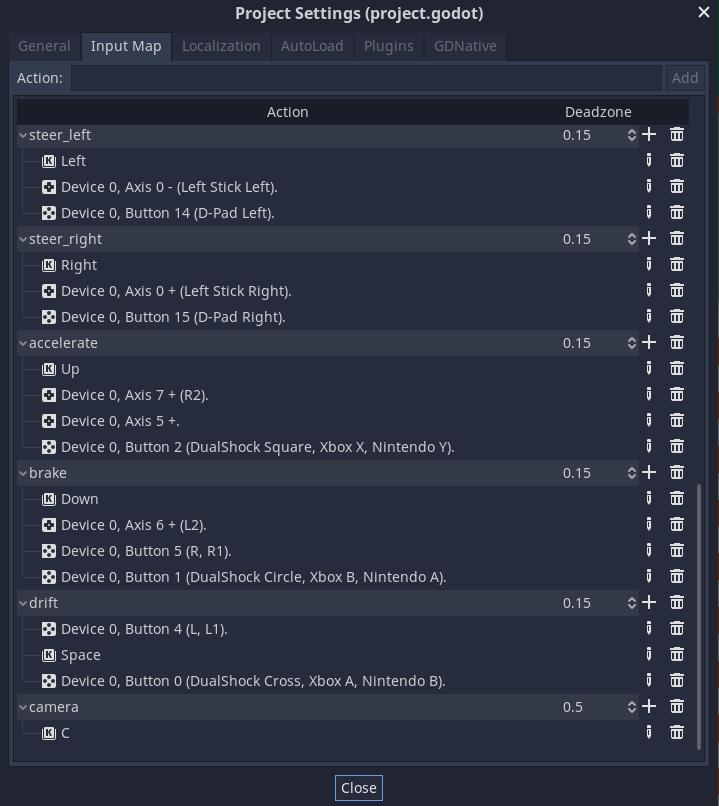 Replace the input() function in player.gd with this:

Notice we already have some exported variables at the top of the program. Click on the player node and try changing the values of these variables in the Inspector.

Create a Node2d as a child of racetrack and name it skidmarks. This will store our skidmark objects. Try to position it in between the track node and the player node (since that is where skidmarks should appear.)